What Is Passive Investing For Retirement?

If you spend enough time on the Internet you eventually run into web sites that promise you a nirvana of “passive income” for life.

If it sounds too good to be true, it is. Usually, these scams are nothing more than multi-level marketing operations, pyramid schemes or worse. You end up having to subscribe to some newsletter and the credit card charges never stop.

Yet “passive investing” is a real thing and inside that you will find a form of true passive income. Not only is it real, it’s by far the best way to invest for retirement. 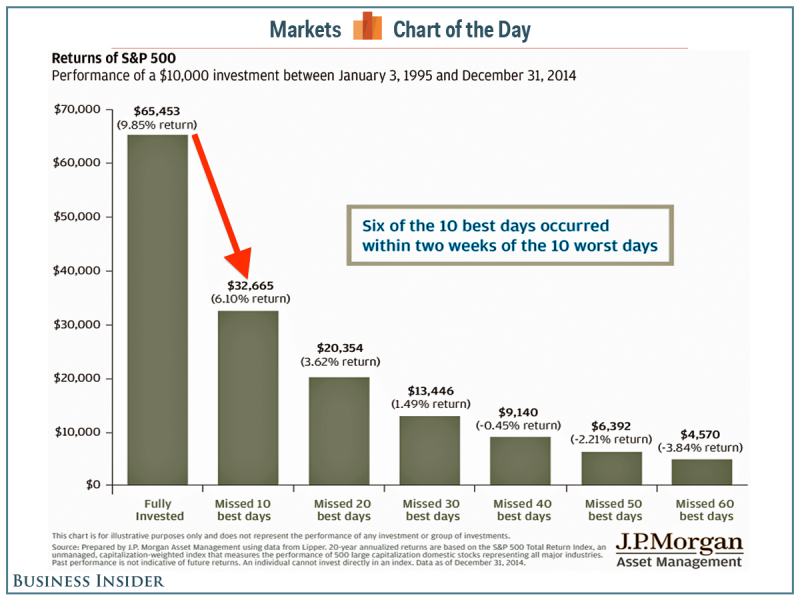 Rather, you own the entire stock market through an index fund. The passive investing part is the fact that you no longer attempt to figure out which stocks are “better” than the others, when to buy or sell them or whether the prospects for any given company are improving or worsening.

Nor do you attempt to guess which parts of the economy might heat up, or even if the economy is moving toward growth or recession. It’s a passive investment. You hold it and do nothing.

That might seem scary, but the data show that just staying invested is the key to superior long-term performance. As JPMorgan explained in a recent letter to investors, missing the 10 best days in the market is shockingly expensive.

Missing those 10 best days, however, would have resulted in a 6.10% return. It doesn’t sound like a huge difference, but the dollar amount is half the money — you end up at $32,665.

It just gets worse from there, missing the best 20 days, best 30 days, etc.

But think about that. Thirty days is just one month over 15 years. You could have been invested nearly the entire time but if you were out on just those 30 days your $10,000 becomes just $13,446.

The reason staying investing works is because of compounding, the ability for invested money to grow significantly as the years stack up. The other feature, which is truly passive income, is the fact that stocks often pay a dividend.

A big part of your overall return each year is dividends, cash income that typically amounts to 2% a year on your money. In short, just staying in can help keep you even with inflation, while appreciation and compounding turn small dollars into major retirement wealth.

You really don’t need a get-rich-quick scheme to figure out how to create lifelong passive income. The idea is so simple, yet so few people seem to understand it.

Buy investments, stay invested, reinvest dividends. Compound and repeat, hopefully at a low cost. That’s really all it takes to retire on time.

Pimco’s active ETF is an industry outlaw
Why Google’s Investment Advice is Good for All
Does Sell in May and Go Away Work?
Investing Basics: Index Funds
Five Retirement Finance Missteps You Must Avoid
Use Stocks To Defend Your Retirement
How To Buy More When Stocks Go On Sale
Wall Street Seems to Like the Election Result. Why Is That?