Are you investing in the right asset classes now? How would you know it? If you’re like many investors, you probably watch a lot of financial pundits on cable TV, each one talking up their particular case for which asset classes ultimately will outperform the market.

Meanwhile, there has been a lot of hand-wringing in the investment press over the state of market. Volumes are too light. Small investors are staying out. Scandals and failed IPOs are scaring away Main Street.

Barry Ritholtz, a Washington Post columnist, author, blogger and CEO of research firm Fusion IQ, took a stab recently at explaining the current state of affairs. He came up with 10 points explaining why small investors are on the sidelines.

We can’t say we disagree with his analysis. Certainly a weak, directionless economy has taken a toll. Wall Street and the banks have shown they shouldn’t be trusted. As we have noted, increasingly, trading is turning into a robotic duel among supercomputers, not a fair exchange of information or pricing — unless you believe the Flash Crash somehow correctly reflected economic reality.

But we do have a bone to pick with his No. 4 culprit, about asset classes:

Poor returns across all asset classes: Investors have been burned by a series of booms and busts: dot-com stocks (2000); real estate (2006-?); equities (2008-09); even gold (2011-12) is significantly off its 2011 highs. Perhaps after these experiences, too many investors have decided that investing isn’t such a great deal after all.

Yes, these things happened. But nobody held a gun to investors’ heads and made them buy all of these asset classes in sequence, riding them up in the euphoria and then down through the inevitable collapses.

In fact, as we are sure Ritholtz would agree, asset classes go in and out of favor with exceeding regularity, as the chart below shows. 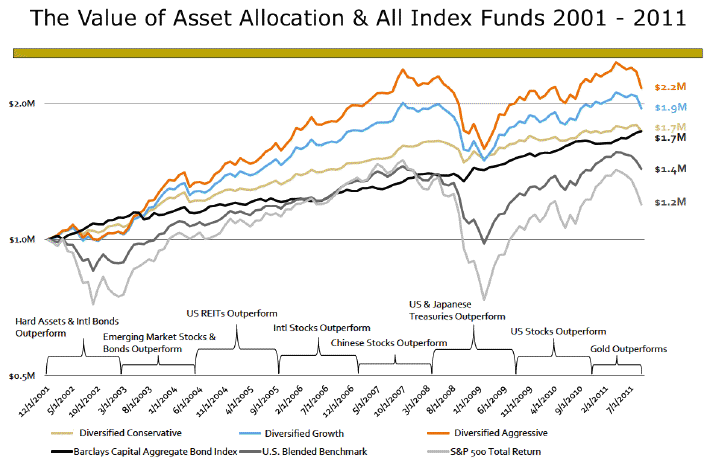 We say regularity, when of course there’s nothing regular going on. Could anybody have consistently predicted the great run REITs had about seven years ago? Or the Treasury bull market? The great run higher (and subsequent cooling of interest) in gold?

Many try, but they often fall into the “too soon, too late” trap, or they pick asset classes and “talk their book” non-stop until they are right. Eventually, almost every pundit get his or her moment in the sun, then plunges back into the investing darkness for years and years on end. Being spectacularly right once in a career is gratifying, but it’s no way to run a railroad.

Asset classes go in and out of favor

Small investors simply can’t afford to be wrong for a decade. They would be wiped out in just a few months on such singular bets on asset classes. Rather, if you had held a portfolio of index funds or ETFs of the six major asset classes since 2000, rebalanced regularly, collected your dividends, and (here’s the key) turned off CNBC, you would have done great.

It’s not even that hard to do. We’re surprised, continually, that professionals insist on picking winners, when it’s so much simpler — and cheaper — to pick them all, trim the winners, add to the losers, and keep on swimming.