When you were growing up you probably played with a toy called the Magic 8-Ball. An oversized plastic billiard ball with a window at the bottom, it was a triumph of marketing if nothing else.

It worked like this: You asked a question out loud, any question, and then flipped the toy over. A triangle-shaped die inside a hazy liquid would float toward the window and provide one of 20 possible answers.

Ten were positive, along the lines of “Yes, definitely” or “Outlook good.” Five were wishy-washy replies, such as “Ask again later.” Five were negative or leaning that way, such as “Don’t count on it” or “My sources say no.” 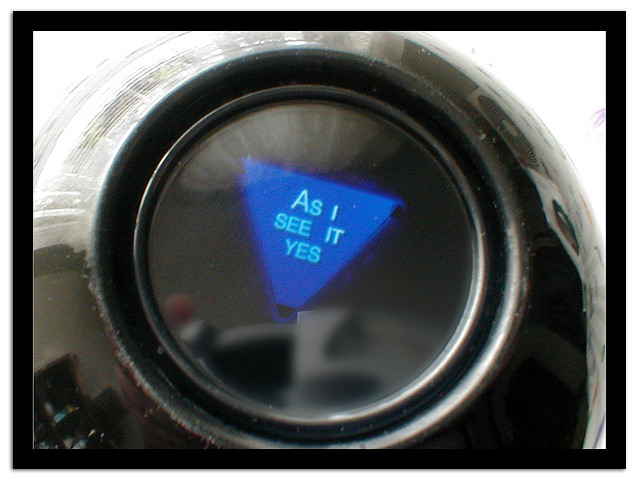 If you spun the ball around long enough, chances were pretty good you’d get a positive answer or, at least, not an outright “no.” You had a better shot at good news than coin-flipping or some other purely random decision process.

When the markets are wobbly, which they are from time to time, we are tempted to take action, to “do something” to protect our money. It’s only human.

But consider what you are doing when you make that choice to sell in reaction to a decline. You are taking your money out of the market. In doing so, you incur a new risk, one which cannot be discounted.

Namely, stocks might instead rise. It’s extremely hard to say which direction your investments might take at any given moment, but it’s equally difficult to ignore the possibility that you have it exactly wrong.

What’s more, as prices fall, we tend to delay buying. Again, an assumption is made that the value of the potential investment will continue to fall.

The important idea to grasp is that when the media or your broker or your in-law (and, frankly, three out of four professional stock pickers) predicts that the market will crash, he or she is in no better a position to guess the near-term outcome than a Magic 8-ball.

In fact, you are likely to hear that person couch their predictions in similar language: “My sources tell me” or “the outlook is not good” or perhaps “this month (fill in the blank) is always a risky month for stocks.”

If markets fall, they look brilliant. If they don’t, it’s hard to pin down such a response as clearly a “yes” or a “no.” They have Magic 8-Ball immunity.

The far easier and calmer way to invest for retirement is to decide first what your exposure will be to stocks vs. bonds and other, less volatile investments and then stick to it.

If prices fall, buy more. If they fall again, continue to buy. You’ll find that as prices decline your dollar goes further, an effect known as dollar-cost averaging. You get more shares.

Most importantly, you will be in the habit of ignoring short-term ups and down and the impulse to time the market. Buying in all markets — up to your pre-set limit for each investment type — keeps you from sitting out markets that could easily rise and give you unexpected gains.

Your market-timing friends all have stories of “coulda, shoulda, woulda,” times they sat in cash and watched the market roar higher. What they tend to forget is that those gains, smartly rebalanced, would have compounded for them into the future.

Investing Basics: When ETFs Are Better Than Index Funds
Fearful Markets Make A Good Retirement
Beat The Market? The Odds Are Shrinking Fast
Avoid Stock Market Impulse Shopping
Should You Worry About The Fed?
5 Mistakes That Sink A Retirement Plan
The Reason You Buy Bad Stocks: Good Stories
How To Create A Lifelong Investment Plan